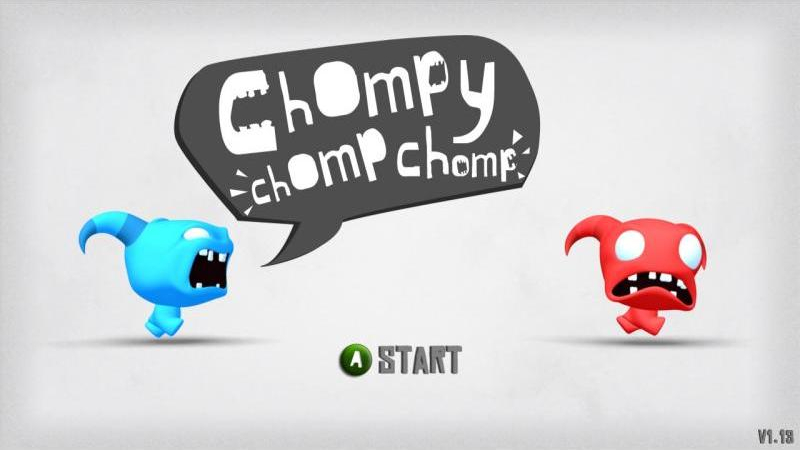 I stumbled upon Chompy Chomp Chomp a few months ago when a friend told me that she was looking for something cute to play. Sadly though, she only had access to a Mac at that point and I ended up not buying it for her (the game is Windows only).

But – a seed was planted, and I thought the game looked like lots of fun, so I started thinking that I should get it for myself. A few weeks later, I noticed IndieGamerChick‘s #GamesMatter campaign on Twitter, and after asking her how it worked, she gave me a Steam key. Which turned out to be for Chompy Chomp Chomp!

Of course, what originally attracted me to the game, was its design. The little critters (known as Chompies) are so incredibly cute, you just want to hug them.

I’m very fond of minimalist games, and this appeared to fall very much into that category. Chompy Chomp Chomp hasn’t wasted anything on unnecessary bells and whistles. There’s nothing in this game that doesn’t need to be there. This kind of minimalism might not appeal to every gamer, but if you want to get straight to the heart of a really fun game without wasting time on configuration, customisation and all sorts of other nonsense, this gets the job done.

Artistically, the character animation is just perfect. From the way they move when running, to the absolutely joy-inducing little dance the winning Chompy performs at the end of Battle Mode, it’s just a pleasure to watch. Of course, the disappointment visible in the faces and body language of the losing Chompies is also so well done that it just very nearly breaks your heart.

Obviously, this is what really matters. Because no matter how artistically magnificent it may be, if it doesn’t play well, it’s not a good game.

Yet, Chompy Chomp Chomp doesn’t fall into the latter category. In keeping with the minimalist aesthetic, the game’s concept is pretty straightforward: eat or be eaten. What makes it interesting, is that it seems to be a sort of “inverse Pacman” world – there are a bunch of brightly coloured critters on screen, vaguely reminding one of the ghosts from Pacman. But – you don’t control Pacman – you’re in control of these critters. And if you’re playing multiplayer, each Chompy is controlled by a player (or AI – point being that there will be four Chompies on the screen, regardless of how many humans are playing).

The game has two main modes of play (both with single or multiplayer/co-op options) – Arcade Mode and Battle Mode. Unfortunately, I’ve only played the game in single player mode (which is a point I’ll come back to), but I’m pretty sure that multiplayer is really its true strength.

In short, it’s a free-for-all eat-fest. But there are rules – you can’t just eat anyone. In Battle Mode, the game dictates who is allowed to eat you, and who you’re allowed to eat. And this changes at random intervals. A coloured ring beneath your Chompy indicates the colour of the Chompy that you’re supposed to be chasing.Of course, if you run into a Chompy that isn’t your target, nothing happens. Unless that particular Chompy’s coloured ring is the same as your colour… In which case, you’ll be turned into a puddle of goo with eyeballs, and respawn at a random location.

There are also various powerups that appear at random and allow you to trap your opponents, slow them down, or let you teleport across the screen to a new random location (which often helps to escape a tight spot). Of course, aside from the maze walls, there are some random obstacles too, in the form of bottles of poison, some of which slow you down, the others changing the direction of your movement (up becomes down, left becomes right) that often leads you straight to your predator’s gaping maw.

I definitely preferred Battle Mode to Arcade Mode. Arcade Mode presents a slightly different gameplay mechanic. You have to munch all the Blobbidees that infested your garden. There are purple and yellow ones (at least initially) and your action button lets you change the colour of your target. And quite simply, you eat the colour you’ve chosen and get eaten by anything else. I’m not sure if there are more colours later (I didn’t get very far with this mode, as it’s time-based, which is something I’m generally not very good at).

The game AI is perfectly sufficient to allow play even if you’re by yourself. But, as I mentioned, its strength is really in its multiplayer aspect. There are also Easy, Normal and Hard settings for the AI Chompies in Battle Mode.

The only thing I found tricky to keep track of, was which Chompy was to be the bane of my existence. It’s simple to tell who you’re supposed to eat by the coloured ring beneath your character, but scanning the screen in all the chaos to figure out who’s chasing you can be rather disorienting. I don’t think this is a problem though – it’s part of the challenge and the enjoyment. It’s especially interesting immediately after the targets change, as you may find that the Chompy that was your prey, suddenly turns into your predator right as you’re about to catch it.

This is another point where the game excels. I ran it on an ancient Pentium 4 computer with Windows XP without a single issue. And it looks great. Yay minimalism!

The game is playable (on PC) using the keyboard or a game controller. You can’t customise the controls, but since it’s only directional with one action button, I don’t think it really matters much. The downside is the fact that only two areas have been designated as control areas on the keyboard – WASD if you’re playing on the left, and the arrow keys if you’re playing on the right. Which means that you’d also need two game controllers for your PC to allow four friends to play together.

Aside from that, it really does play better with a game controller (which is how I played it 90% of the time) than with the keyboard. See my remark under Weaknesses at the end of the review.

This is one aspect where I’ve noticed some murmurings of complaint from a few other reviewers, although I can’t say that I entirely agree with them.

Firstly, the theme tune is an extremely catchy little bitpop ditty and I sometimes find myself humming it when I’m in a happy mood (another good sign).

Again, keeping with the minimalist theme, there appears to be one tune for the menus, one for Arcade Mode, one for Battle Mode and one for the victory screen. What I think the pessimists may have missed, is that if you play this game as it is intended – in a party setting with a whole bunch of friends – chances of you actually hearing the music are going to be pretty slim as there’ll be lots of shouting (and likely cursing) going on. An epic operatic score would have been completely lost in the din. Which again shows that Utopian World of Sandwiches made a lean, mean, eating machine with this game – nothing is wasted.

It’s a great little game and you’d definitely not be wasting your money if you get it. But – if you’re a solitary gamer, it might not be the ideal choice for you. If you have lots of friends coming over to your place for games on a regular basis – definitely get it.

IndieGamerChick (who is responsible for me having Chompy Chomp Chomp in the first place – thank you so much!), is running a great holiday campaign for everyone who’s been involved in #GamesMatter. Go check it out.

This site uses Akismet to reduce spam. Learn how your comment data is processed.